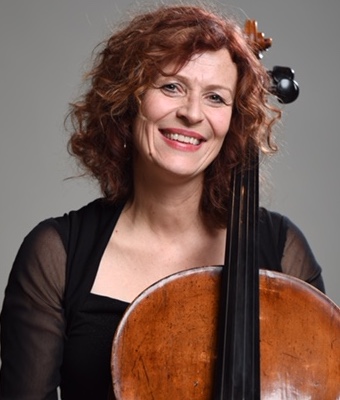 Ronda Metszies was born and raised in Edmonton, where she studied cello with Sheila Laughton. After receiving her Bachelor of Music Degree from the University of Victoria, she continued her studies in Edmonton with Tanya Prochazka, then in Germany and Austria, with Julius Berger, Friedrich Sellheim and Heinrich Schiff.

In 2003 Ronda joined the Edmonton Symphony Orchestra, with whom she has appeared as a featured soloist and has spent 5 seasons serving as interim Assistant Principal Cello.
Ronda has a special interest in early music, and is principal cellist of the Alberta Baroque Ensemble. She makes frequent appearances as a guest soloist with the ensemble and in 2015 she premiered Alan Gilliland’s Concerto for Cello, Strings and Harpsichord, which was commissioned by the ensemble for her. Ronda is also a member of Kent Sangster’s Obsessions Octet, whose debut jazz CD was nominated for a Juno Award in 2007. Since then, the octet has released two additional CDs, toured Europe twice, and performed at Carnegie Hall in 2012 and at the Rochester Jazz Festival in 2016, where their concert was recorded for national broadcast by PBS. Ronda released two CDs of music for cello and piano on the Arktos label, as well as a music video for Bravo! Television.