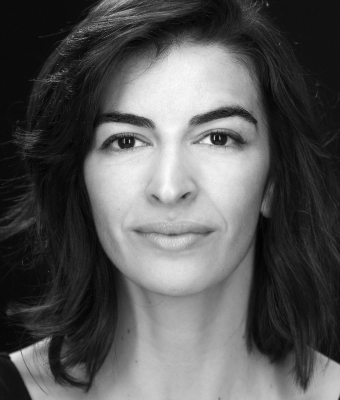 Originally from Montreal, Canada, dancer and choreographer Dorotea Saykaly danced with Compagnie Marie Chouinard from 2006-2014, performing lead roles such as Prélude à l’Après Midi d’un Faune and touring internationally. In 2014 she relocated to Sweden to join the Goteborg Danskompani where she has worked with renowned choreographers such as Sidi Larbi Cherkaoui, Damien Jalet, Alan Lucien Øyen, Marcos Morau and Sharon Eyal.

She choreographed her first stage solo ‘UNraveling’ which was awarded at the Warsaw Zawirowania Competition in 2016. Since then she has created stage works such as; ‘Rosy Retrospection’ (2018) for SkanesDansteater as the Inaugural choreographer for the 3D National Collaboration; ‘DOUBLE BLINDED’ (2019) for the 3D festival at the Goteborg Danskompani; and her second solo, ‘SHE’ (2019) which premiered at Festival Quartier Danse at Place des Arts in Montreal.

Dorotea’s work moves fluidly from the stage to film to visual arts. She has collaborated choreographically with the Swedish photographer duo Cooper & Gorfer on their international exhibit ‘UTOPIA’. She has co-created, choreographed and performed in the awarded screendance short films ‘PAINTED’ (2012) and ‘Brief Candle’ (2013) both featured in film festivals internationally. Her most recent film ‘SHE’ (2021), co-created with Emil Dam Seidel, has been awarded Best Experimental film with SIFF, Honourable Mentions with Around Film Festival Barcelona, and had its North American premiere at the Fotografiska Museum NYC in April 2022.

She is the inaugural recipient of the Emily Molnar Emerging Choreographer Award and has created the new stage work ‘RELIC’ for Ballet BC which premiered in May 2022.