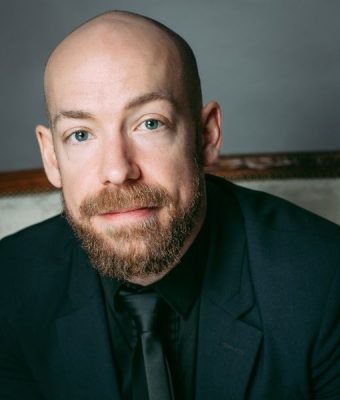 Shay Kuebler began his artistic development at the age of 5 with dramatic arts and martial arts in Shito-Ryu Karate. His early artistic growth would lead to dance and a versatile background in Hip Hop, Jazz, Tap, Contemporary and Ballet. He continues to develop and further his artistic practice through travel and intensive study, which has included study in music, theatre, dance and martial arts in the USA, Brazil, Japan and China.

As a performer, he has worked in the fields of Tap, Hip Hop, Contemporary Dance, Circus Arts, Film and Theatre. He has performed for numerous companies across Canada, USA and The UK, including Kidd Pivot, Holy Body Tattoo, Pachimama Theatre, Line 1 and Company 605. He has choreographed and directed works for The American Dance Festival, Citie Ballet, Les Grands Ballet Canadiens, Moment Factory and Decidedly Jazz Danceworks. In Vancouver, he was co-founder of The 605 Collective and, as the founder and Artistic Director of Shay Kuebler Radical System Art, he has produced and directed four full-evening dance works that have toured nationally and internationally: Karoshi, Glory, Telemetry and Feasting on Famine. In 2014, he received The Mayor’s Arts Award for emerging dance artist from the City of Vancouver.

Shay has worked exclusively as an educator and choreographer for Simon Fraser University, L’Ecole Du Danse Quebec, The London Contemporary Dance School and The American Dance Festival. As a choreographer, he’s choreographed for numerous industrials, commercials and films including choreography for Apple, Kyocera phones, Bravo television network, Denner grocer in Switzerland, HP computers, and The Vancouver Film School. He was a show director and lead choreographer for Royal Caribbean Cruise Lines’ aqua shows – The Fine Line and HiRO.

Shay worked as a choreographer and movement director for the first ever Apple-produced TV mini-series with “eye on the ball” productions.